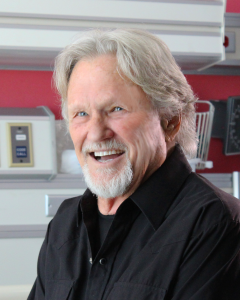 In a gesture of true generosity, Kris took time out of his busy touring schedule to record the narration of our film at Shriners Hospital. Once again he demonstrated his extraordinary talent and passion for helping others.

Known as a singer, songwriter and actor, Kris has lived a colorful and artistic life.  Along the way Kris has been an Oxford University Rhodes Scholar, a Golden Gloves boxer, a Captain in the US Army, a commercial helicopter pilot, and a janitor at Columbia Records.

His first big break came when Roger Miller recorded Kristofferson’s song “Me and Bobby McGee”, which later became a rock hit for Janis Joplin. Sweeping floors in Nashville sound studios, Kris met Johnny Cash – and got Cash’s attention when Kris landed a helicopter in Cash’s backyard to give Johnny some song demos. Johnny Cash ended up recording Kristofferson’s “Sunday Morning Coming Down”, which was voted 1970’s Song Of The Year by the Country Music Association.

Kris went on to record many albums and even more memorable songs, including “The Silver Tongued Devil and I”,  “Loving Her Was Easier”, “Help Me Make It Through the Night”, and “For the Good Times”. His solo career was embellished by his ensemble work with “The Highwaymen”,  Johnny Cash, Waylon Jennings, and Willie Nelson.

His acting career began in 1971 with The Last Movie, and took off in A Star is Born with Barbra Streisand. Kris went on to appear in dozens of films, including Alice Doesn’t Live Here Anymore, Heaven’s Gate, The Sailor Who Fell from Grace with the Sea, and Blade.

Kris lives with his wife and three youngest children in Hawaii, and continues to write, record, and inspire.